Salomon de Ciaves, a Portuguese originned Dutch immigrant to Izmir, donated one of his large courtyard houses to the Jewish Community in 1724 to be used as a synagogue.  Ensuring the purchase of all the religious books and sacred objects required, he also donated some of the neighboring houses and shops in order to bring some revenue to the institution.

The synagogue becoming known as “Bikur Holim”, meaning visiting the sick, probably coincides with the times when the basement was used as a hospital during a plague or cholera epidemics that were once common in the city.

It is also possible that the said basement was once the prison of the Jewish Community. Burned down in 1772, the synagogue was rebuilt in 1800 by Manuel de Ciaves of the same family.

This synagogue is one of the most impressive places of worship in Izmir, with the main prayer hall designed in the central plan, a magnificent Tevah (prayer reading platform), and a ceiling decorated with flower and fruit patterns, and columns painted in green and yellow. 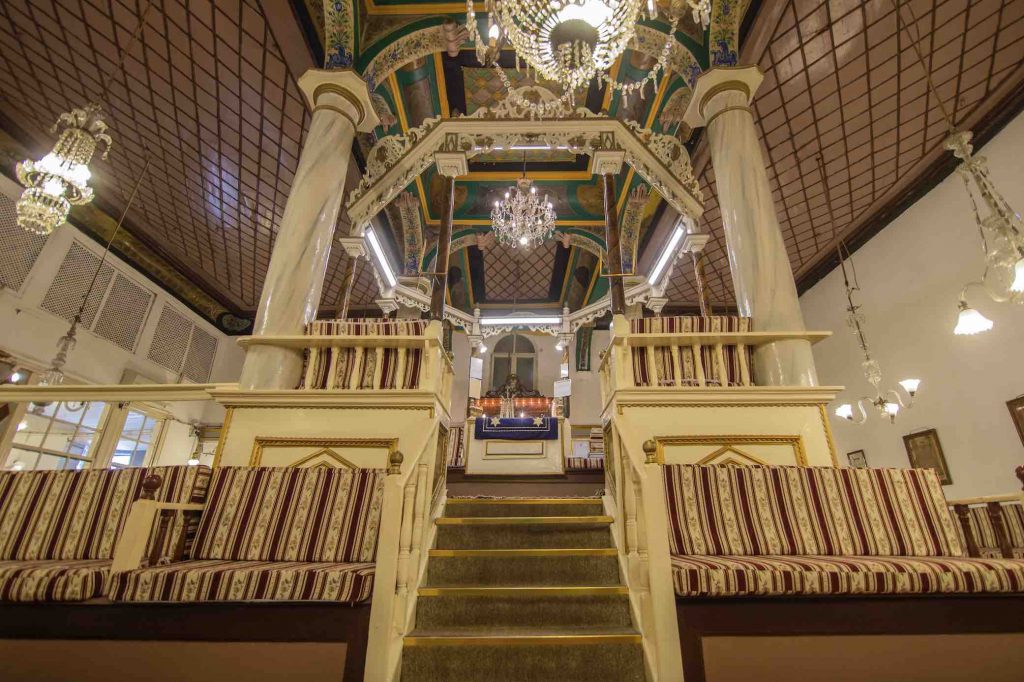 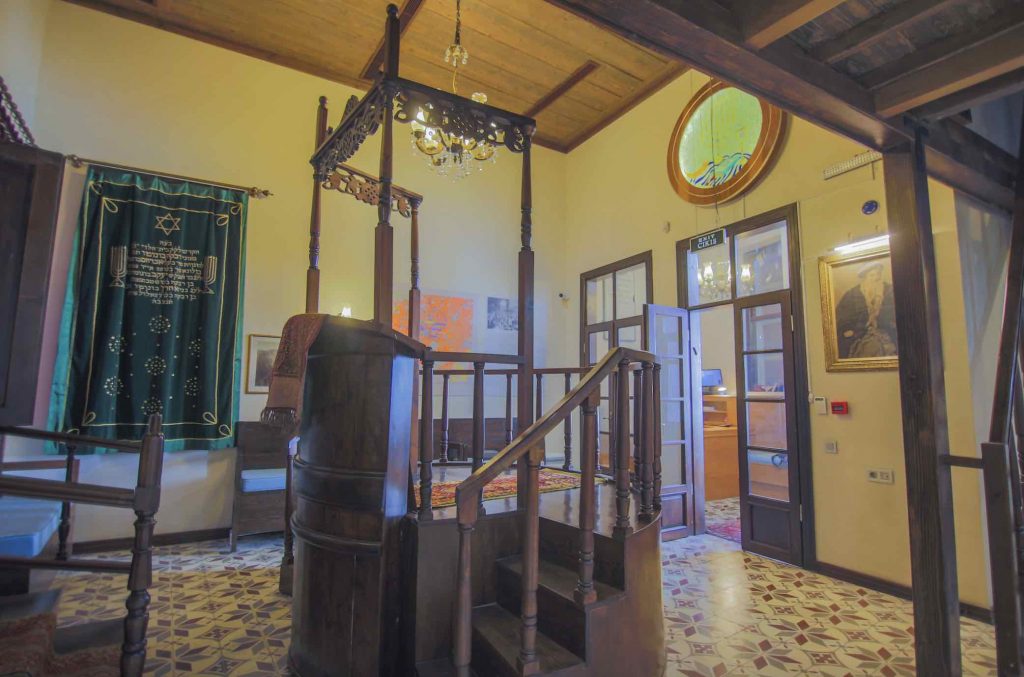 Rabbi Hayim Palachi (1788-1869) and his son Rabbi Abraham Palachi (1809-1899) were recognized as the leading theologians of the Izmir Jewish Community in the 19th century. The reputation of both went beyond Izmir and the Ottoman Empire, causing the Jewish theologues of Europe and Middle East to come to Izmir.

Rabbi Hayim Palachi wrote a total of 72 books during his lifetime, and 26 of them were published. He was awarded the “Theologian in charge of justice” medal by the Sultan Abdulmecid in 1861.

The building, which used to be a yeshiva (religious school) where Rabbi Hayim Palachi and his sons were educated, was converted into a place of worship by Rabbi Abraham Palachi in 1840.

Bet Hillel Synagogue and the tomb of Rabbi Hayim Palachi in Gurcesme Cemetery with the Mikveh (purification pool), have been adopted as sacred places by Palachi’s students, and this group of places began to be known as the “Diamond Triangle”.

The Portugal Synagogue is the only synagogue in Izmir which identifies the origin of its founders in its name. It is one of the six synagogues known to have existed in the period of Chief Rabbi Joseph Escapa, i.e., as of 1620s.  It is referred to be the largest synagogue in Izmir for its period.

This synagogue, which became the focus of Sabbatai Zvi’s “messiah movement” in the 19h century, has witnessed a series of historical events. The Portugal Synagogue, considered to be the stronghold of the Sabbatai opponents, closed its doors to Sabbatai Zvi when his movement expanded. Years later, Sabbatai and his supporters broke into the synagogue and chased the rabbis, who were the leaders of their opponents.

Sabbatai Zvi, who had previously declared himself “the Messiah of the Jews”, also declared the day liberation with this raid, and the Portugal Synagogue became the center of the Sabbataist movement with new participants.

The Portugal Synagogue, which burned down in 1976, was restored in 2018 to serve as a social activities center. 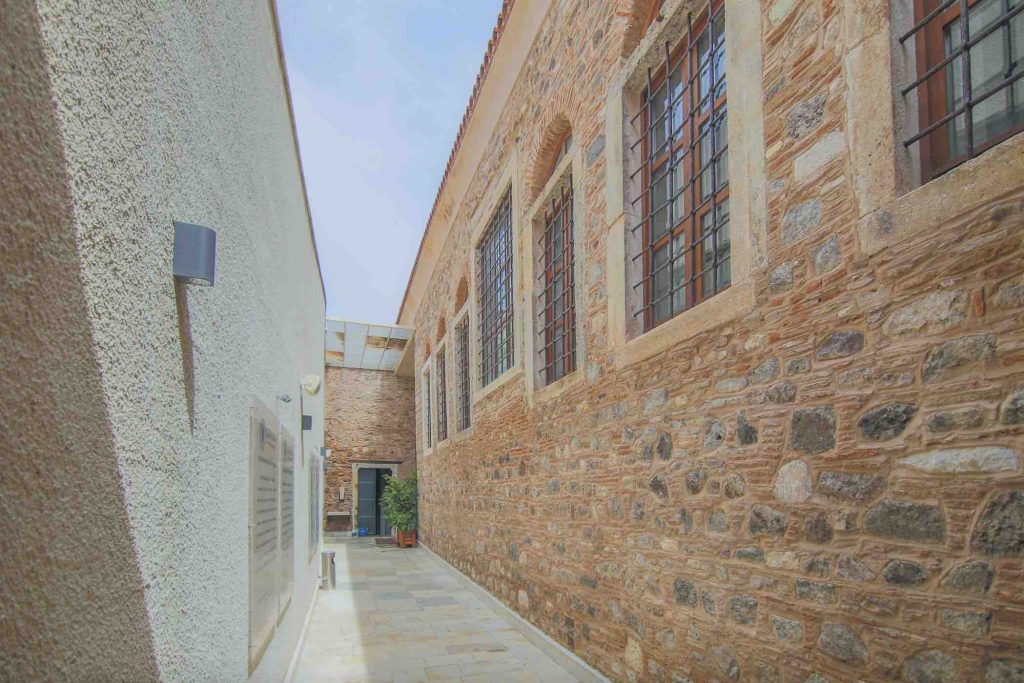 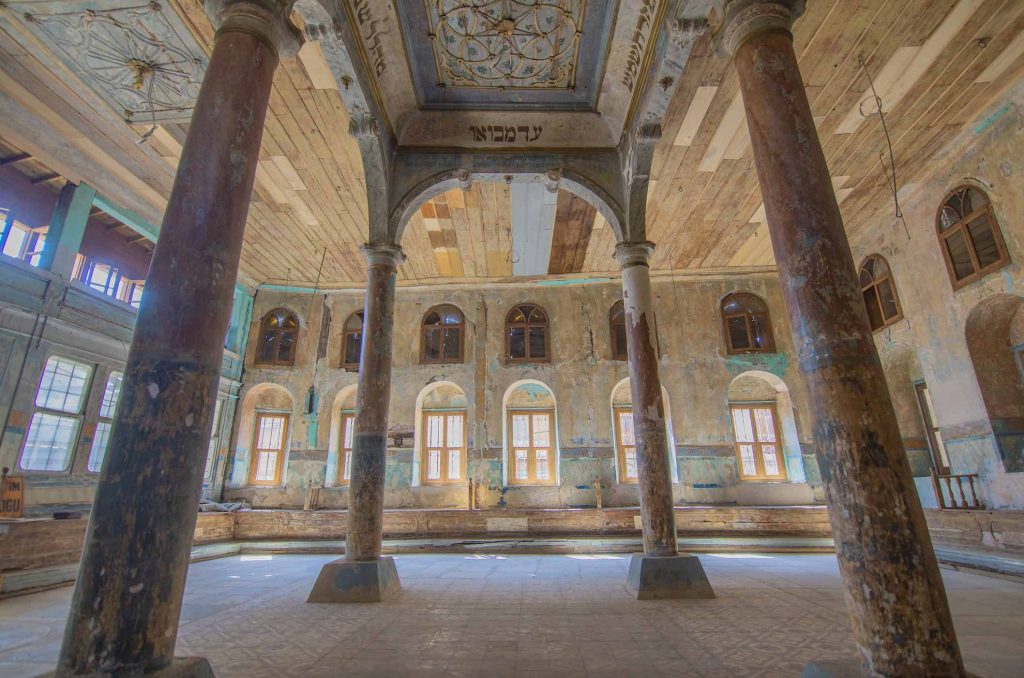 The Etz Hayim Synagogue, which has survived the dangers of fire and earthquake many times, was damaged in the fire of 1841 and had been repaired by Daniel de Sidi in 1851.

The Tevah (prayer reading platform) of this synagogue, which was built in a central plan, was moved from the center to the sides of the Ehal (cabinet where the Torah scrolls are stored), inspired by European synagogue architecture, in the early twentieth century.

In a document belonging to Salomon Ben Ezra, who died in 1688, it is mentioned that Muslim Turks performed prayers in Izmir’s only existing synagogue. The period that is the subject of this document is thought to coincide with the Turkish conquest of Izmir and that they prayed in this synagogue since there was no mosque in the city.

The name of Hevra Synagogue is referred to as “Talmud Torah” in ancient times. Known to have existed during the period of Rabbi Joseph Escapa, in the seventeenth century, this synagogue suffered fires and was rebuilt several times. The building rebuilt by Chelebi and Menahem Hacez brothers after the fire in 1838, burned down again in the fire of 1841 and remained in a ruined state for many years.

The Hevra Synagogue, built with a central plan, is a typical Izmir synagogue with its Tevah (prayer reading platform), triple Ehal (cabinet where the Torah scrolls are stored) composition and Midrash (study hall). The large number of the Sefer Torah (Torah scrolls) once available in the Hevra Synagogue, ensured a prestigious status.

The roof of Hevra Synagogue collapsed in 1999. The rescue works have been completed in 2020, but works related to the restoration of the synagogue has just begun. 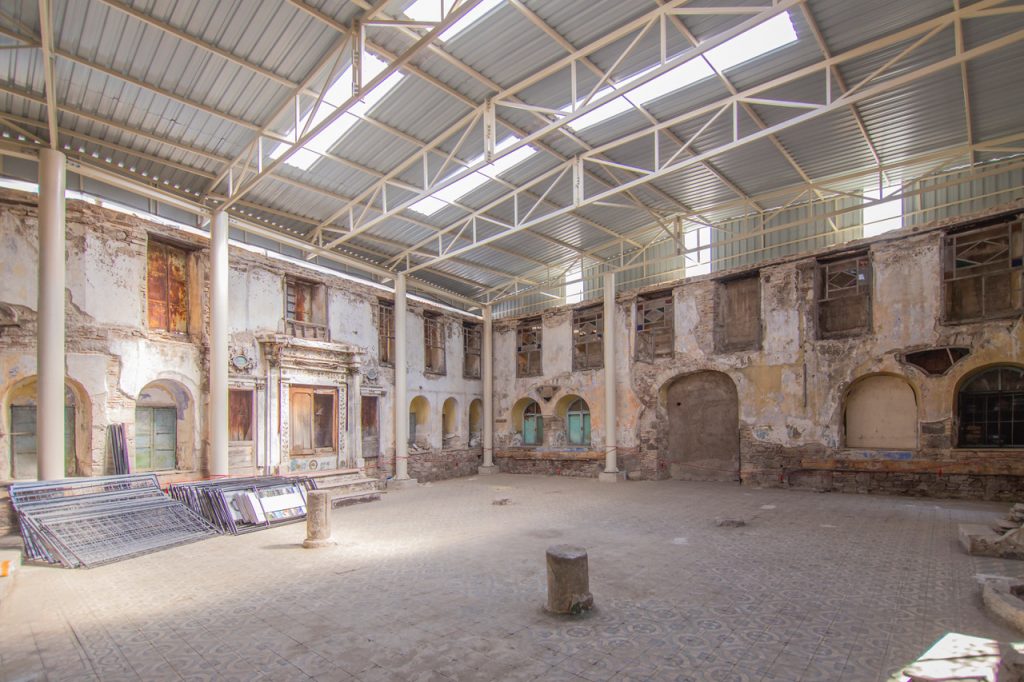 Shalom, is the synagogue in which Joseph Escapa, Chief Rabbi as from 1620, had achived to organize the Jewish Community and became the leader starting from 1648.

Rabbi Escapa also provided young Sabbatai Zvi with religious education, but once Zvi declared himself the “Messiah”, Escapa led the way in Zvi’s expulsion from Izmir.

Shalom Synagogue is the only synagogue that was not damaged in the fire of 1841. It can be said to be the most authentic synagogue of Izmir, through its ceiling decorated with engravings, and floral cushioned sofas stretching along the walls, and its interior reminiscent of a typical Anatolian house. Although it was built on a central plan, in 1939, the Tevah (prayer reading platform) was moved in front of the wall opposite the Ehal (cabinet where the Torah scrolls are stored).

Due to the inscription at the entrance of the Algazi Synagogue, it is accepted that it was built by Ishak Algazi in 1724. Another view claims that this synagogue existed at least in the seventeenth century and was controlled by Sabetay Sevi in ​​1666.

The basement floor was used as Midrash (study hall), and as a place where Asara Batlanim (ten old men) prayed all day long for the salvation of the country and its people. In addition, unused scriptures and religious objects were stored there before being buried according to Jewish tradition.

Ishak Ben Salomon Algazi, another member of the Algazi Family known to have raised prominent rabbis, is also an associated figure with this synagogue. Born in 1889, Ishak Algazi was educated at Yeshiva Bet Hillel (religious school)i, and became a Hazan (cantor) at the Algazi Synagogue like his ancestors. Ishak Algazi has been recognized as one of the most important composers of religious, secular and classical Turkish music. 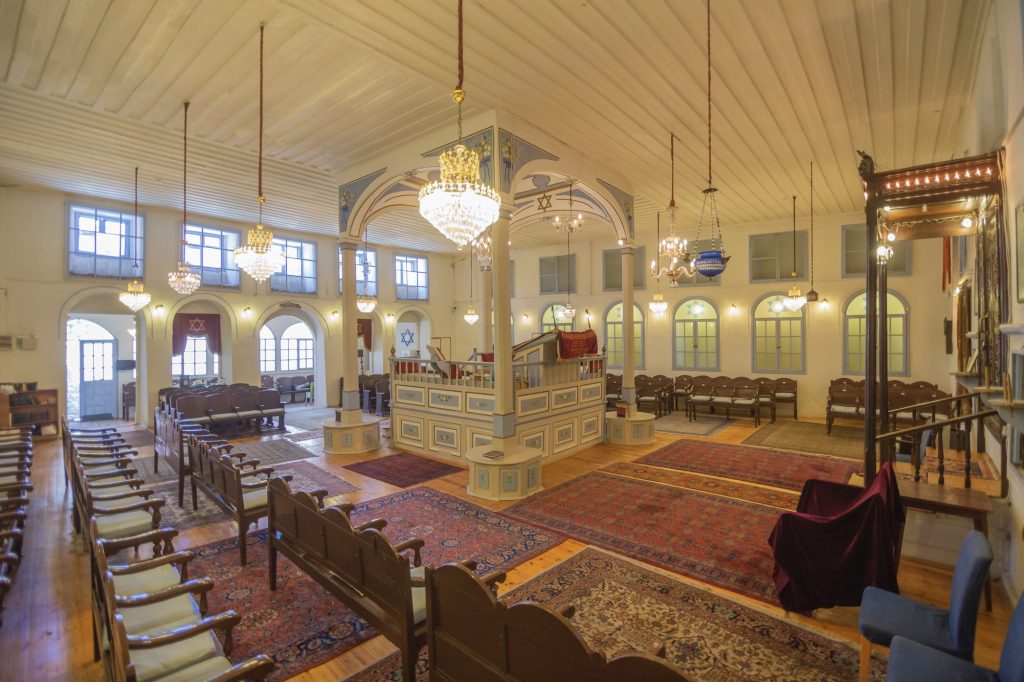 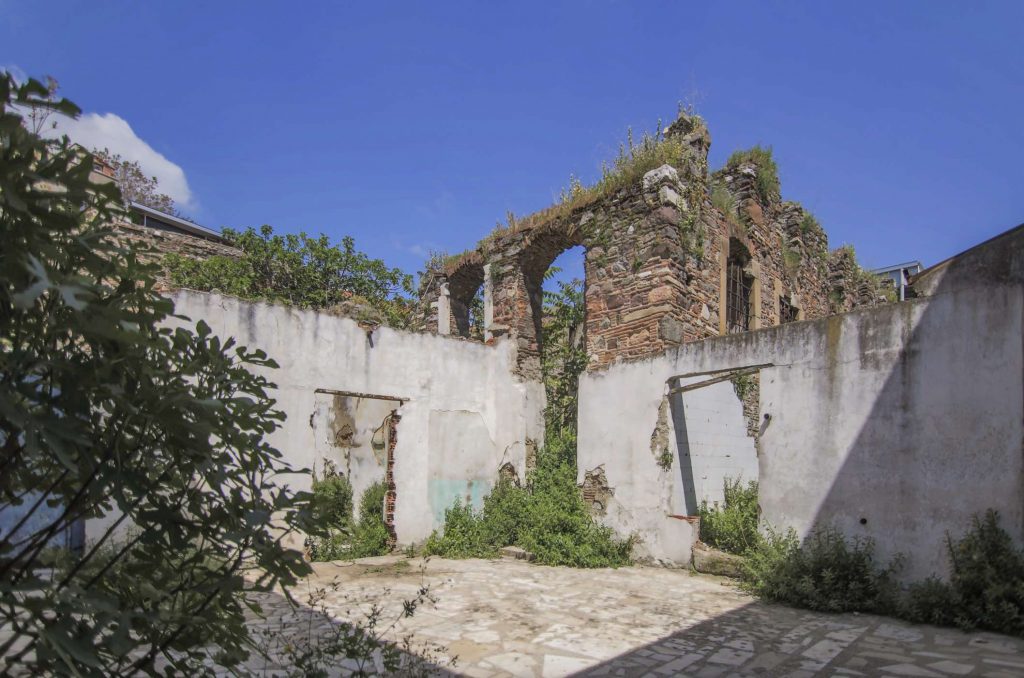 Located in the heart of Izmir’s historical Kemeraltı Bazaar and the old Jewish quarter, the synagogue was known by two names. The names “Orahim” (Hebrew) and “Foresteros” (Spanish), meaning “foreigners” or “guests” in both languages, indicate that this place served new Jewish immigrants who came to Izmir and joined the local Jewish community. The synagogue was probably built in the 17th century, and remained active until it was destroyed by a fire. When it was heavily damaged, and ceased to function as a synagogue, its courtyard served for many years as a kosher poultry slaughterhouse where atonement offerings were made before Yom Kippur, the sacred day to Jews.

The building, which burned many times in the seventeenth century, was destroyed in the fire of 1841, and was rebuilt with the contributions of Moiz Bengiat Yerushalmi.

It can clearly be seen from the floor layout of the synagogue that it was transformed from central plan to dual Tevah (prayer reading platform) form. The Ehal (cabinet where the Torah scrolls are stored) with its doors on which lines from the Torah are written, fits the triple composition unique to Izmir.

According to a story told, this synagogue was built with the donations of a Portuguese originned lady named Donna Gracia Nassi (1510-1569).

However, current research has revealed that it was donated to the Izmir Jewish Community to be used as a synagogue by a lady named Lea, who decided to immigrate to the “holy lands” from Izmir in 1664.